Beginning in the 1970s, I kept journals. While a few of them may contain outlines for classes and courses, or rough drafts of reviews or articles to submit for publishing, most of the entries, drawings, and lists were for my eyes alone. I have recently had reasons to search through journals from the early 1990s; you can do the math! The "essay" that follows is from 30+ years ago, not re-read and certainly never shared until now; it was written in legible and youthful handwriting and, while it now "sounds" a bit pretentious, it was for my benefit alone. I’d have been 42 years old and, I’ve decided since looking back on and reading “the work,” at my peak. Other old journal entries will be added if/when I discover them. Names and locales have been changed to protect privacy.
​

​Why would someone choose to live in _________? Its appeal evades me: with terrible architecture, it seems like a “loser’s” town. Yesterday we were there to deliver two paintings to the Center and, before that, to have brunch at the PT Café, surely the town’s greatest secret. Without planning it, we met and joined Carol and Buster, Lou, Lillian, Mark, and Mindy. Fun people, talking yin and yang foods and numerology, but God-damning this and that, eating bacon and drinking coffee.
There’s a big gap between meaningful conversations and meaningful art. We talk with Jay, for example, about “career” stuff, never the work itself. I’m trying to think of substantive conversations --- with non-artists like Kay at Planned Parenthood or Marie at Liz’s party. Artists? Dawn in Colorado, also Julian, and lately Lou. But their work is on a different level, like it suffers for the sincerity of purpose.
Not too long ago --- talking about who-knows-what --- Jay said he doesn’t really like many artists. I’m thinking the same --- but Jay studiously looks at all art just because it’s art whereas I want to see art, movies, read books that deal with what I’m interested in on a human level. So why not seek out friends and conversations (connections) in the same way --- through CONTENT and intention rather than form/style/medium.

that
​Liz says artist don’t know what their work is about! She is, conveniently, married to someone who works in a manner that supports this myth. She was in the audience when Henry Hopkins “discussed” the work in Capirotada*, obviously not having seen anything but the slides and those for the first time, very ad-libbed --- this apparent to the artists while the audience took notes! At the party, Liz described my painting with Hopkins’ exact (and misdirecting) words, saying Nature Mort is “about the frame “ --- such nonsense, yet she, as Historian, knows more about my work than I?

*     *     *
​
J. L. was really taken with the large Living Room Painting, particularly the 5' one of Mexico City, painted in a lavish jumble of color and stroke. It is such a positive painting, and he was curious as to my mental activity while I painted it. I could tell he expected (and wanted) me to have been in some spiritually-heightened state in order to have produced such lushness. Below is the large scale follow-up to it: Mexico City (7' x 5') topped by a rather decorative panel that added another 2-3 feet to its height.
​ 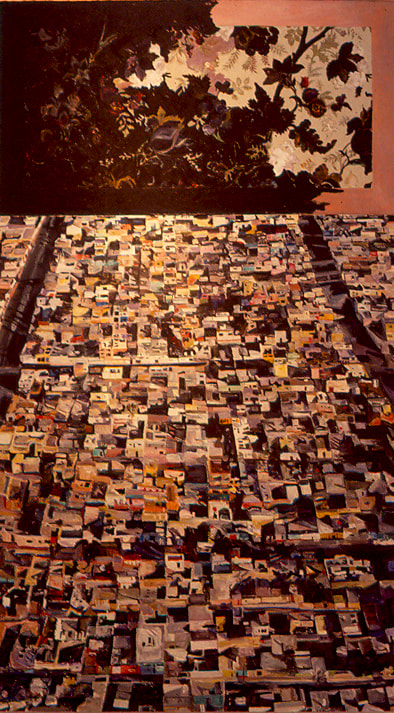 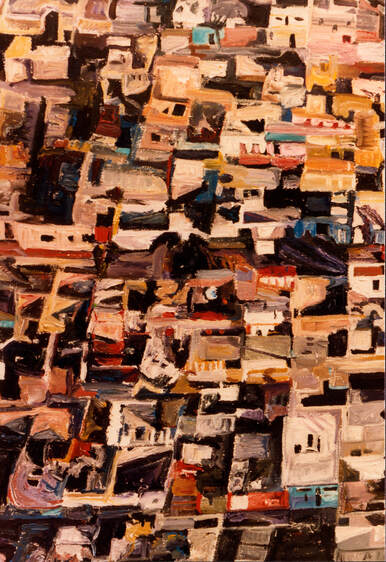 (When I made that painting --- it probably took 30-40 hours of very disciplined and intense looking and responding --- I listened to Beethoven and to the Bulgarian Women’s Choir, full volume.  Today, working on Painting for Mourning/Painting for Morning, while listening to Elvis Costello, I found myself thinking about A’s gallery and the disadvantage and unfairness, saying mentally, over and over, like a litany --- you are not a nice person, I return your disinterest, etc. Out of such negative thoughts, beauty can be born?)

Example: Nature Mort is about the relationship of nature and commerce. It exists, this relationship, though I don’t presume to understand it or know that much about it. The idea for NM came the day I heard on the radio that a Japanese corporation had purchased the concession at Yosemite. My reaction was immediate and intense: Is nothing sacred?!? And the answer was, obviously, no, nothing is; if a price can be affixed to it, it becomes a product.

​Eleanor, an architect, saw Nature Mort as the dominance of the Bauhaus over Romanticism; the woman from Amnesty International interpreted the border as humanity being oppressed and marginalized by the bands (of ???). The painting is about the real relationship of two oppositional forces ; its meaning is open to interpretation. Other relationships can be applied to it, but “meaning” is brought to it from the outside.
The image for commerce is the bar-code; nature is represented by a floral border from an antique tapestry. I kept the tapestry format, but replaced the central image, where in previous centuries a lyrical landscape would have been, with the black and white stripes of the computer bar-code, a symbol I had used in a larger, 7’ x 5’, painting (now destroyed) before.* On a most basic level, that is what both paintings were about. 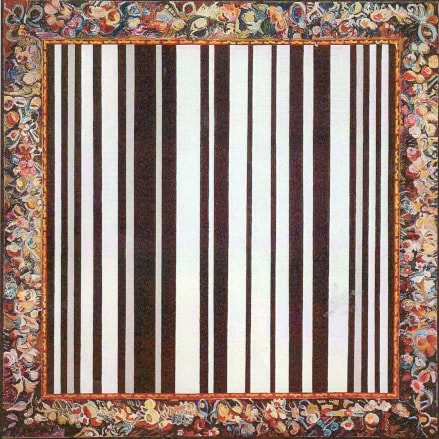 ​​Nature Mort, 1990, acrylic and enamel, 60” x 60”
Collection of the Mississippi Museum of Art
As I worked on the stripes, I realized that nature has no straight lines and no black or white, and that this ON/OFF code --- universal, ubiquitous, and our most shared communal image, we ‘consumers’---, is non-natural, anti-natural. And since we are part of nature, this image separates us not only from nature and “the natural,” but fragments us as human nature.
​
Maybe when an artwork contains a truth (all things brought into balance, authentically expressed, etc.)­­­ then it becomes/is meaningful. It function as metaphor, in multi-layered ways. Ele brings her meaning to it, so does  Amnesty International; it is full of meaning.

It isn’t necessary or even important for one to know the symbols as I used them, although I always think that knowing the sources adds richness and complete understanding, filling in an essential though acceptable gap. In this case, the resulting painting­ --- is perhaps pretty and desirable as an object for decoration. Even if the painting is seen peripherally (as “wall fodder”), if it has power, at some point a person who views it repeatedly will come to some recognition of the internal relationships: black/white and its opposite; black versus white, etc. They are real relationships and meaningful ones. Maybe not consciously, but connections may be made between the symbols and what they symbolize, and the inner workings of the painting’s components.


I stand outside on clear desert nights and shout up toward the zillions of stars: “What does it mean?” And in the studio, the paintings ask it in a quieter tone, and then: “Is meaning possible?” “Is art a way toward meaning?”

The fact that there are no answers doesn’t lead me to meaninglessness; instead, the question is a door into the wonder-fullness and mystery. No despair, no hope, either; just a head-shaking, hands up-lifted, loopy question mark. This is the up-side to the isolation of art, that my job is to be peaceful in the quiet, to feel living as a fluid process, moment to moment, the luxury of meditational thought.
​
When we look at art, we ultimately want to ask what it means. But that’s the final question --- and, finally, doesn’t have to be asked.


__________
*Capirotada was an exhibition at the El Paso Museum of Art in 1991.
**Nature Mort was painted in 1990. If I were making it today, I would emphasize the bar code, perhaps including some numbers, to make it more easily recognizable. When painting the simple stripes, I made some of the lines gray just because of “design” issues; now those make no sense to the original content.