​Maybe it was in private or maybe it was in a public forum, but some time after the terrorist attack on the World Trade Center --- months, at least, perhaps years afterward --- I asked my artist-friends (Gaspar, Suzi, Ray, Jim, Susan) if that day had changed their art. I may have asked them how their art had changed, I was so sure it had shaken everyone to their cores, I had not a doubt. But not a single one said it had affected his or her work, not one. I couldn’t believe it. I still can’t believe it.

9/11 almost did me in. As an artist, it forced me to change everything about my work. Its subject matter could no longer be so tough and confrontational. Its intention could no longer insist: Pay Attention, to both me-as-creator and to the eventual viewers. After 9/11, the last thing I wanted to do was to pay attention.
​ 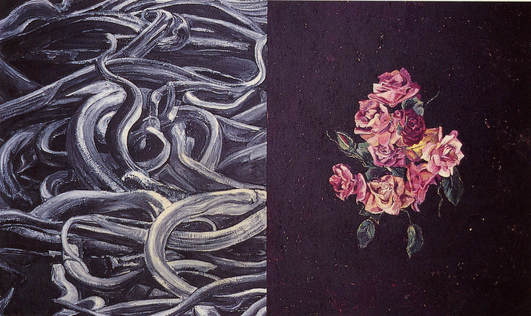 Just Go to Sleep, 1990, 30" x 56", private collection, Portland OR
​​For six months after that day I lay on the couch with my back turned away from the constant television news. I taught my university classes, but otherwise did little creative work, and I almost never smiled. A small portrait of my first grandchild gave me a reason to spend time in the studio and to engage in a close-up stare with something precious, life enhancing, and positive. Melodramatic though it sounds, it saved my creative life.
​ 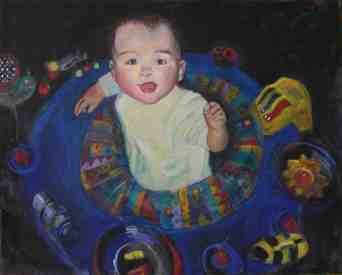 Finally, I was ready to go back to the studio each day, but my way of working changed. ​From May 1, 2002, until April 31, 2003, --- exactly one calendar year --- I worked on five large canvases that I called my “Post-Traumatic-Stress Series.” I painted in an entirely new way (for me), using only objects that were already on hand, having no preconceived theme or content, just gluing and applying metal leaf, and editing, fiddling around hoping something good would occur. How would I know when a work was finished, when to stop? Simple. On that next year's date: DONE. These were eventually shown in gallery and museum exhibitions, and in time four were sold to institutional or private collections and the remaining one was eventually altered/destroyed.
​ 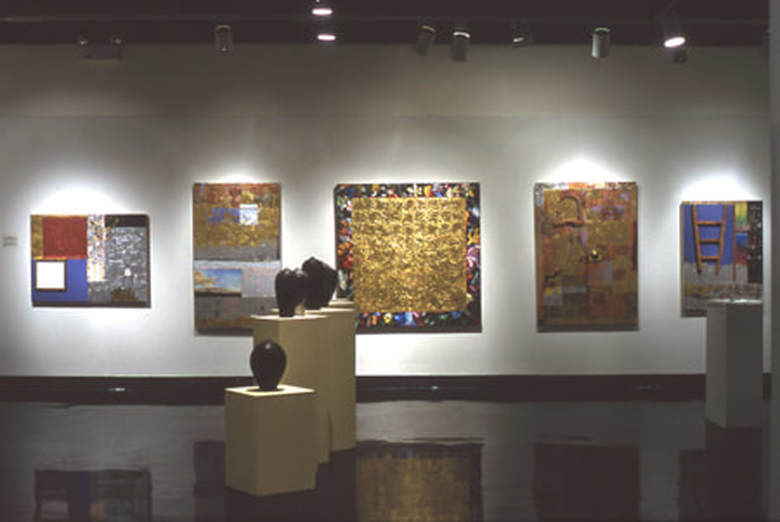 ​Sometime during that odd year,  I came across a small color slide that I’d never looked at or shown before, its origin unknown. It showed an 11th century manuscript page with a very compelling image of six beasts, a centered Satanic figure, and medieval men tumbling down the page. From the beginning, all I wanted to do was enlarge it into a monumental canvas, but there seemed no reason to do a major painting until, as luck would have it, I was asked to have a solo show in a Santa Fe gallery. I think this is the only time in my life I projected an image onto the compositional surface, and the painting in its early stage was more a true reflection of the original manuscript.
​ 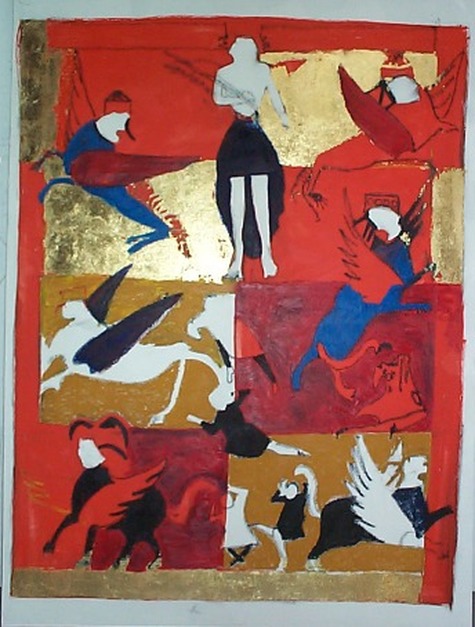 ​At ​first I included the figure of the devil (how do I know who he is/was? He wore a beauty-pageant banner across his chest that said SATAN), then I painted him out; then I painted him in; then I painted over him. Same with the nice little figures falling down the picture plane: in, out, in, and finally out. At some point during this long process --- the canvas is 7 feet tall, by the way --- I realized that instead of a scary warning, I wanted my painting to serve as a prayer or plea. So I made a lead panel that reads in Latin: Domine Deus Noster, Miserere Nobis.. As I’d been working in the studio, I listened over and over to Messian’s “Misesere,” and the first thirty minute “song” had those five Latin words sung, a capella, over and over: God have mercy on us. Both the music and the images summed up my ongoing post-9/11 mood of existential despair. 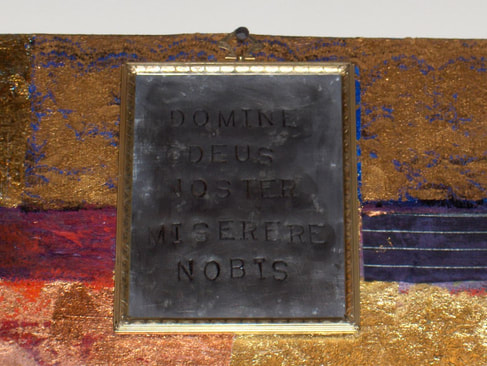 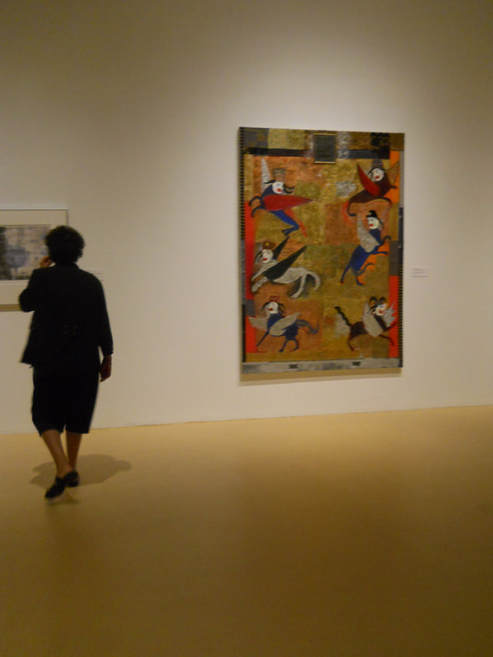 ​I intended to call the painting “Miserere,” but before titling it, I happened to pick up the original slide (which I can no longer find) and to read the titled hand-written on it: “Apocalypse.” So that became its name. Before I showed the work, I read in a novel by Philip Roth “Six Reasons for Evil”: hysteria, hate, ignorance, malice, anger, and stupidity. Around the same time I came across Salman Rushdie’s “Six Instincts to Control”: passion, anger, intoxicant, attachment, greed, and jealousy. Both lists seemed relevant to the painting and a noteworthy coincidence with the six winged beasts, originally painted to symbolize Medieval plagues. I made small lead panels with six words to accompany the beasts, but decided they only confused things, so I wrote Roth’s list on the back of the canvas.

The painting was finished and exhibited in 2005. Its title is “Apocalypse 1050-2004” with those dates (of the manuscript and of my painting) on two small hammered lead plates attached to the bottom edge of the canvas. This would be my final painting. 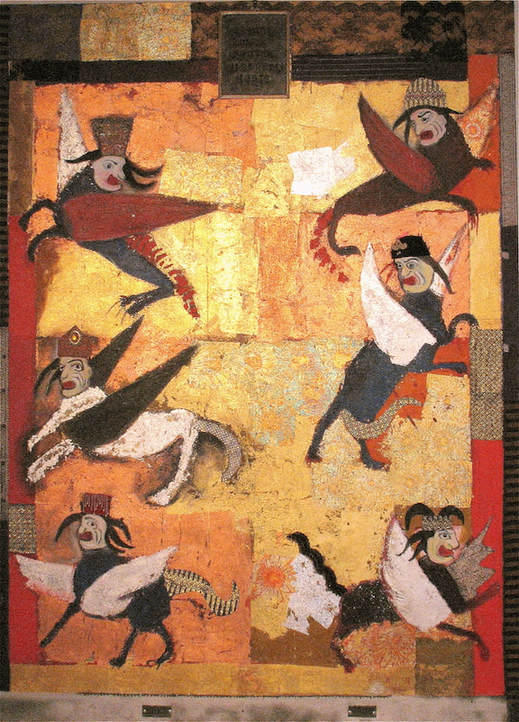 God have mercy on us.

Just Go To Sleep, Collection of Jennifer Dawkins and Anthony Faulkner, Portland OR

Baxter, 2001
Collection of Jennifer Dawkins and Anthony Faulkner, Portland OR

2. The Edge of the Known, Collection of New Mexico State University