Pictures and Their Stories #2, version #2

It started as a simple rumor --- she’d opened up some veins, someone had heard, maybe they’d read something on the internet, it seemed the news was everywhere --- but, however, it quickly spread through the arts community. Impossible, everyone said; she’d been so happy, laughing, silly, even performing a stand-up routine at a recent party.

But those who knew her better, even though it might have been only through social media, had noticed some warnings. With the celebrity's recent suicide dominating the news, she’d felt comfortable talking openly about her own long struggle with depression. (Her point, she said later, was to remind people that it is possible to be a happy person and to have clinical depression; she meant to be proving that.)

And further beneath the surface, in ways known by only the closest few, more alarming signs were there and they might easily add up to a crisis.

She’d been in “a dark place” for several weeks.

The physical pain and heaviness --- symptoms she’d managed for nearly thirty years --- were at an all-time extreme.

Her sleep had become an every-other-night affair, and one recent night found her, for the first time, totally sleepless.

Somebody she loved rejected her, and she cried a lot.

She’d been home alone for a few days.

Having not drunk (much) wine for months, she jumped off that wagon.

She wrote a bitter and scathing poem about her hurt feelings.

A young friend who spent an afternoon with her collaborating on the poem/video reported: "She was really 'down.'"

In the past weeks she had asked relatives and friends if they wanted mementos: antiques, jewelry, paintings, etc.
She was seeking permanent homes for her archives of writing, exhibition catalogs, and other documents.

Some of her gifts were refused, and she felt insulted and hurt.

The day before the "vein opening" incident, her doctor had increased the dosage of the anti-depressant she had taken             for many years.

Seeking verification, they hesitantly called her home and were surprised and relieved when she herself answered the phone. When asked about the “facts” listed above she laughed heartily and said, indeed, all were true. And yes, the day after an appointment with her doctor, and yes, still in an unusually prolonged depressed state, she had in fact “opened her veins.” “But," she said, "you’ve spun it all wrong,” and so proceeded to tell them the whole story, warning that it might be long and boring. That tale follows, in her own words. 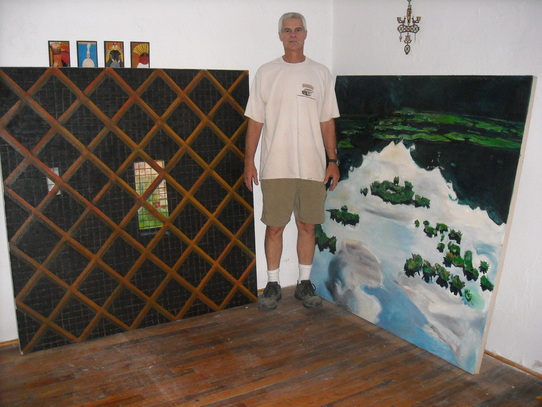 Left: Aperture; Right: Black Water. SCALE.
We’ve been downsizing for a long time, getting ready for an eventual move, so a year or so ago, I offered to give away two big paintings. One of them (Black Water) was snapped right up and found a nice permanent home, but the other one (Aperture), though spoken for, was never picked up. Last week I decided to finally destroy it. It isn’t that I didn’t like this painting; I actually liked both of them as objects of meditation. There’s something Zen about each of them, a visual contradiction. 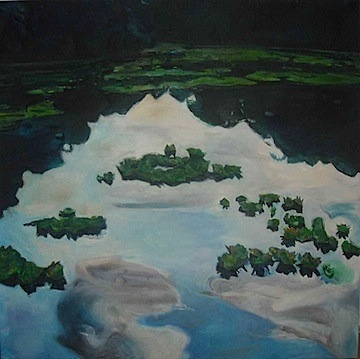 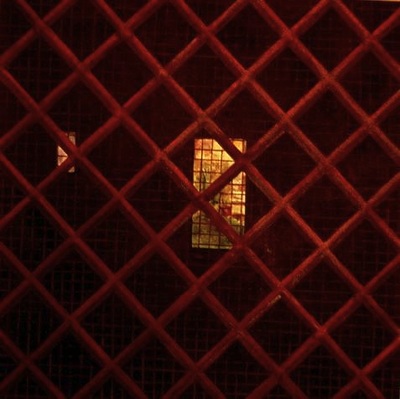 Black Water was an image from a trip on the Amazon River back in 1992. The main river is an opaque brown, and it’s called “brown water,” while the tributaries are like polished mirrors: “black water.” I like the idea of looking down in order to see up, always have. Aperture (also titled Venice View) was from a photo I took in Venice, Italy, and it’s really quite tricky to look at because you have to make an optical choice: to look either at the surface grid or “into” the work’s central aperture. I envisioned both of these paintings being in some corporate or medical waiting room, inviting long study in order to discover the visual and conceptual ingredients.

But theses paintings were a problem for me since they didn’t make sense with my other work of the 1990s. Rather than being painted in acrylic --- my medium for 25 years --- they were in oil. I’d started my painting life using oils, but in 1976 or so, after doing a lot of silkscreen work in my unventilated kitchen, I developed a toxic reaction to turpentine and shifted to using acrylics. In 1993, when I’d decided to do these large and uncharacteristically literal paintings, I thought that surely my reaction to oil paints and solvents was ancient history and that these two pictures would be well suited to oils. I started on both paintings, roughing them both out, developing both of them at the same time, but within a few days, I knew that I couldn’t work with the poisons. So I hurriedly finished them and set them aside.

Aperture had real problems as its surface was very uneven with areas of varying and annoying gloss. The painting professor told me to continue adding layers of varnish, which I did. Mistake: the finished work could only be shown and seen in dim light, else it reflected in a distracting way. So when a fellow offered to accept it as a gift, he had to agree to two conditions: he must understand that, although it was a gift, the work was not without value, and he had to display the work in an environment without windows or other strong light sources. He agreed. Months later the painting still sat in my studio. He needed to borrow a truck, he said. Still he did not come. A year passed. You can't give it away, evolved into You can't make someone accept your gift. This was, and is, a tough lesson to learn, one I have resisted. The truth of it makes me sad.

Last week, feeling bad and needing something unchallenging to work on, I returned to the problem of Aperture: what to do?
I decided to turn the painting into a rug. The idea of putting one's shoes on the former-Art: there was some meaningful satisfaction in that, my making the ultimate insult. 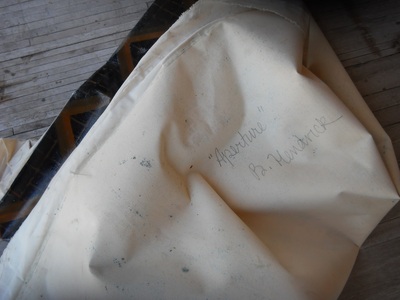 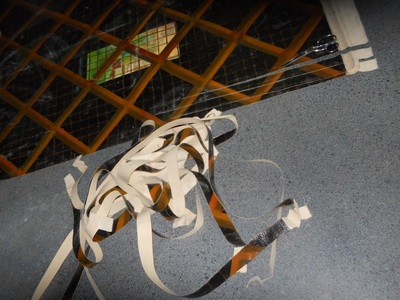 I took it off its stretcher and cut it into strips, ruining my right hand in the process and discovering gloves! And then, with husband out of town and nothing better to do, I decided to weave it into a bathmat or rug. I set up shop outdoors on the porch. After stapling the longer strips to the original stretcher, they began to sag, and I had to pull out the staples and re-stretch each horizontal band. 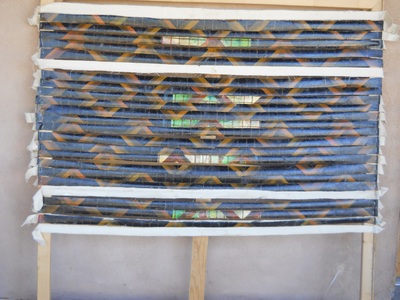 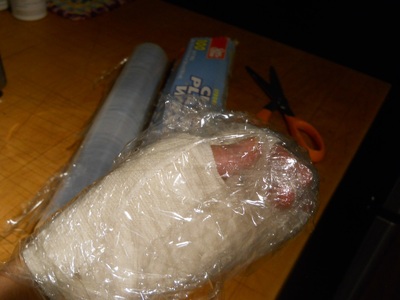 When I was pulling, pulling, pulling on one of the strips, its opposite end detached and I was flung back onto the wall. My left hand raked hard against the rough stucco wall, and the skin on my big, blue, ugly, and protruding old veins was scraped off. There was blood. Lots of blood.

So they are happy to report that earlier suggestions of the artist’s ill health, while true to some extent, were misinterpreted; her demise was a logical but erroneous conclusion. She is sleeping a bit better and enjoying her time alone, without the normal day-to-day chores (cooking, she mentioned), working on various projects, and getting ready to have a series of garage and estate and gallery sales. And she promises to post images of the “bathmat” as soon as her hand heals and she can get it woven. Her final statement: Gloves. 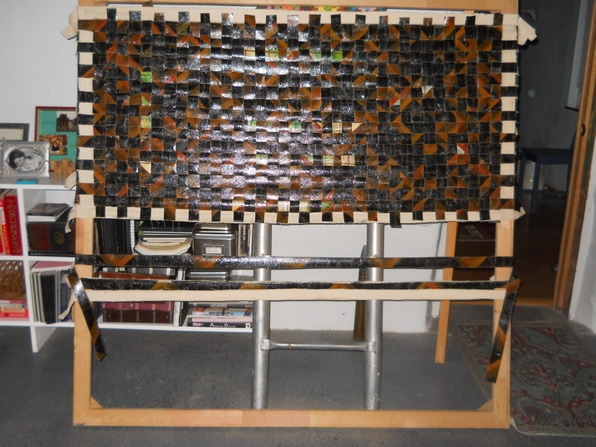 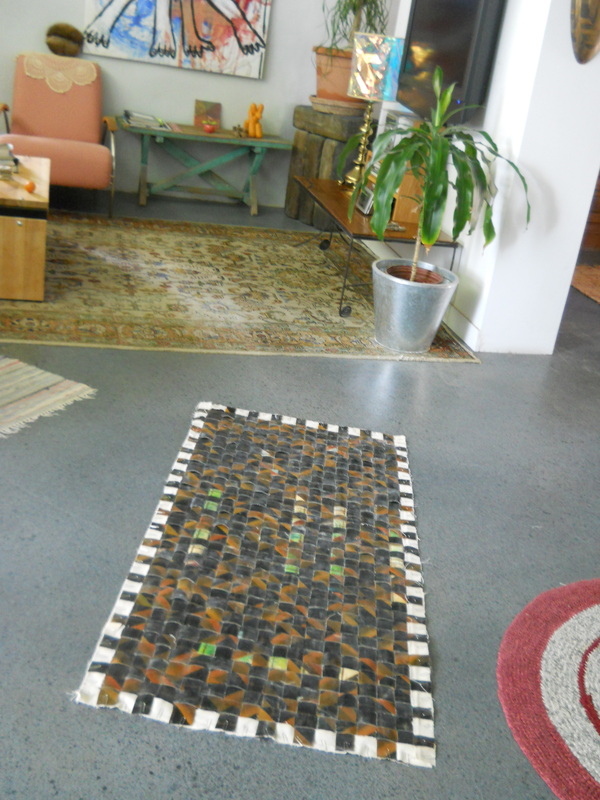