Maybe it’s the fast-approaching 60th birthday, but I find myself being nostalgic these days. Ray (Parish) and I are approaching our 23rd year in the El Paso area and although we’ll always be considered as newcomers and outsiders, we’ve watched the art scene rise and fall during our tenure here. We weren’t kids when we arrived from university positions in the Midwest after a couple of decades of serious artmaking and exhibiting. We were already critical but not yet jaded.

In the late 1980s and early 90s, El Paso was coming into its own as a Real Art town. Becky Duvall Reese had taken the helm at the El Paso museum of Art and would push through its move from Montana Street to its current location. There was one night when James Surls’ magnificent show opened in the vast upstairs exhibition hall and we gallery-goers realized that on that particular night there was no place anywhere that had a better art show. Nowhere. In the world.

And we were in El Paso!

When the Adair Margo Gallery first opened, her premier exhibition featured no less than world-revered Donald Judd, and the Houston gallery owners shook in their Prada pumps. For a short while there was another commercial gallery that featured interesting work from all over the place, but its owner eventually bailed our for San Francisco. I wrote a weekly column of serious art criticism for the now-defunct Herald-Post, requiring me to see at least three gallery/museum shows each week to come up with something to say. At the time there was that much art going on.

The Bridge Center for Contemporary Art, started from the ground up by and for artists, became nationally recognized for its commitment to serious contemporary work. For a number of years it served artists – from everywhere; it was HOT – as a place for cutting-edge work. The people who moved and shook the local scene toughed it out – money was always the issue, as it continues to be in the non-profit world – until they were exhausted. Director Al Harris went on to other, more demanding positions and became a good art writer along the way. Richard Baron moved hither and you, back and forth, until he settled on a permanent yon (Albuquerque1). After 35 years here, James Drake finally threw up his talented hands and moved to Santa Fe.

But others continue to live and work here, maintaining studios, showing their art, sometimes even selling it, outside El Paso: For some of us who choose this as home, UTEP has become a narrower but very respected place for our professional pursuits.

Of course all cities except the Biggies go through ebbs and flows of good art. Ray and I were affiliated with the Mississippi Museum of Art in the 1970s when it premiered “Stella at 70,” a retrospective of Frank Stella’s Modernist abstractions, and hosted Christo and Jean Claude for a “Running Fence” extravaganza. Since then, that Museum has reverted to a mildly interesting venue of deep-Southern traditionalism of regional importance. The public loves it. That’s the way it seems to go.2

And it seems to me that art is going that way, for a large part, in El Paso. We have the Big Horse at the airport, an anachronistic welcome that says way too much of all the wrong things about what art is (for some people) in general and what it is in El Paso. Becky Reese retired, EPMA has been absorbed into the city’s museum complex and, although it is one of the city’s two accredited museums (along side the private El Paso Holocaust Museum), it shows signs of relinquishing its focus on great art to a more public-pleasing schedule.  Adair Margo joined Hal Marcus and other commercial venues with shows tending toward the local and regional (and conservative and of lesser consequence).

All this reminds me of the 1943 manifesto by the New York School, those artists who were demanding more from “American” art as it strived to be equal to the European tradition of Modernism:

“The idea of an isolated American painting… seems absurd to me, just as the idea of creating a purely American mathematics or physics would seem absurd.” (Pollock)

“Art is not national… To fail to overcome one’s initial environment is never to reach the human.” (Motherwell)

But wait! There are some hopeful signs. The Rubin Center at UTEP consistently has the best shows in town as well as lectures and visiting artists. Some new galleries – SPAG and Under the Sun,3 among others – are committed to showing younger artists, non-traditional art, and – one can hope – provocative work.. These are for-profit spaces, but they are run by young artists who have new ideas that make sense in the new art world of the 21st century. Creative Kids is doing some amazing things and deserves all the accolades it is getting. The Border Art Residency (founded by husband Ray Parish) continues to attract artists from all over the world, with its tenth artist arriving soon from Japan to spend ten months in our area. All these programs need our support as we attend openings, talk them up, write reviews, and donate time, money, and other necessary resources.

As so many artist and writers know, the El Paso area is a wonderful place for the solitude required for making serious work; the vistas expand our visual and intellectual world-views. Showing work and being appreciated for it is another matter altogether and secondary to the art-making process. Still, it matters. Tired as I am – sixty approaches – I am going to make a commitment to at least attend openings, to say nice things, and to write a bit more about the new and promising creative events going on. Won’t you join me?

1  since then, to Santa Fe.
2  MMA has subsequently opened a dazzling contemporary building for its collection. Its talented staff of professional imports, has transformed the   Museum once again.
3  Under the Sun became Focus which then became Glasbox, now a for-profit space; SPAG closed; other venues opened.
4  I chose to “retire” instead. 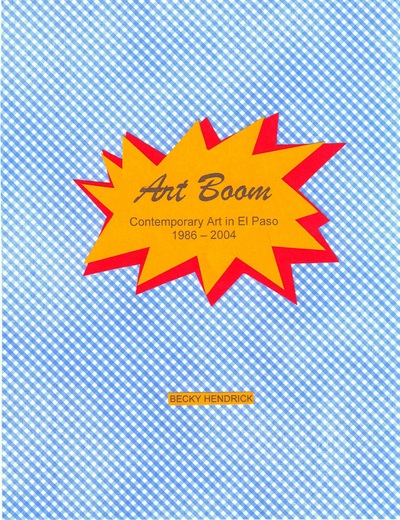 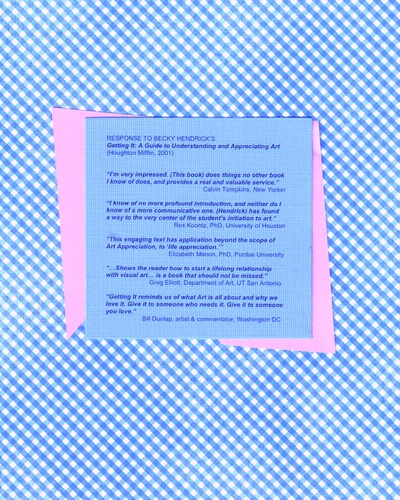 *This essay is the introduction of "Art Boom: Contemporary Art in El Paso, 1986-2004," a collection of reviews and articles I wrote for local, regional, and national publications. It was originally written in 2007. Many changes have occurred in El Paso's Scene since then, and the city continues to grow and change.