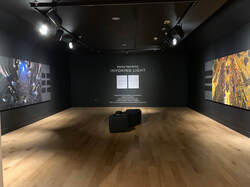 Prior to 9/11/2001, my work --- varied in media, style, and subject matter --- was devoted to paying attention. Consequently, a lot of my paintings of the late 1980s --- thirty-plus years ago! --- centered around environmental, political, and other serious issues. I was also investigating Buddhism and meditation, subjects that played a part in these two paintings.

While in Mexico City in the late 1980s, I visited the Metropolitan Cathedral and spent a good bit of time in the Chapel of the Kings, a small and elaborate space that was soon to be closed due to the sinking of the building, built atop an Aztec lakebed. To remember it, I photographed the main altar which became the subject matter of this painting.

INVOKE was designed to function as a altar, as an invitation to look up and to think/say please, please, please. Not meaning to limit it to Catholicism or Christianity or even to religion, I enclosed the scene between symbols from the I Ching, the Chinese “Book of Changes” The three horizontal lines symbolize “Heaven,” the invisible unknown, and the three broken lines represent “earthy,” the tangible and the material.

​My intent was to invite viewers to appeal to whatever “powers” could work toward solving problems. “Heavenly” powers might include prayer, imagination and idea, music and art, while “Earthly” solutions would be material things that affect change, money being the most obvious example. The point was to “invoke” and appeal to any and all available things to address problems and crises, from the universal to the personal.

The earlier painting wasn’t designed to be part of a duet --- and either paining can be (and has been) exhibited alone ---, but a year after completing it, I came across a photograph that complemented or “answered” its subject matter, content, design, color, and viewpoint. So the painting gave me no choice; it required itself to be made.

The photo (from an unremembered source) showed an image of a dark and empty European church with contrasting sunlight streaming from outside and intense lines of light from interior fixtures. Its colors were dark and cool, the opposite of the previous painting, and I exaggerated the blue palette. Facing it, the viewer looks and "sees" down rather than up.

And its title expresses my thoughts at the time: Where does “the light” come from? From inside the church? (Yes.) From outside the church/ (Yes.) Where else might be its source? To emphasize that question, I added many suggested figures, loosely described, to hold lights and to presume another, internal source.

(A close look at the center-front of the painting reveals a tiny self-portrait, a figure standing with arms raised in a questioning gesture. While the pair of paintings evokes religious imagery, I am agnostic, satisfied with questioning “the mystery” and not requiring answers.) 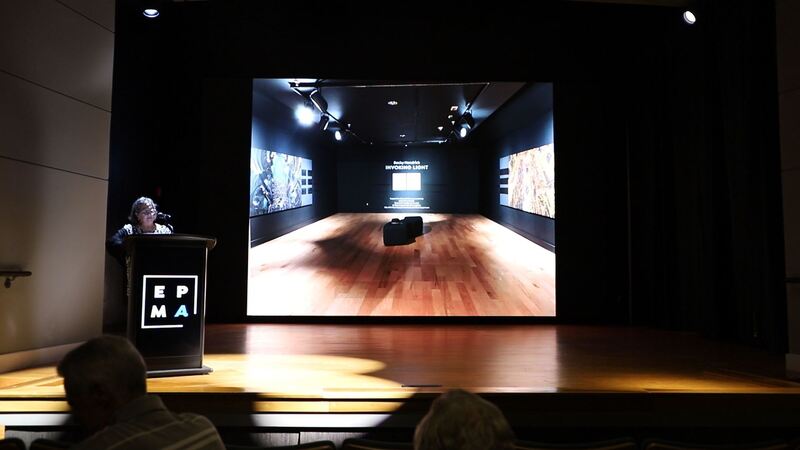 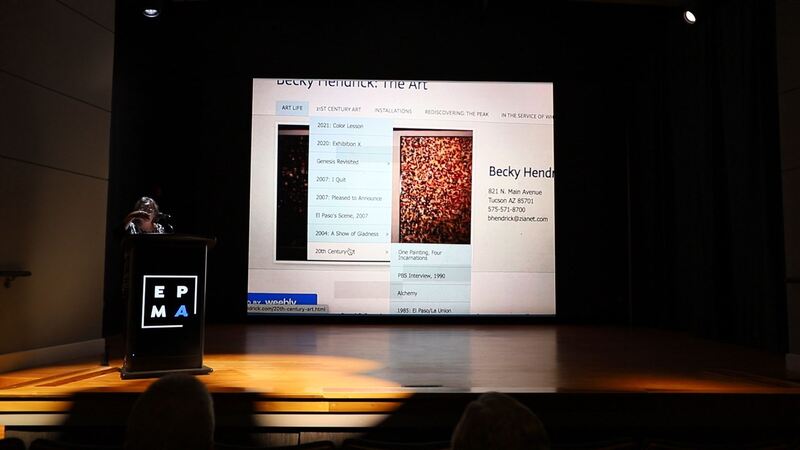 A "lecture" --- I prefer to call it a gallery talk --- was scheduled at the El Paso Museum of Art for mid-exhibition in September, 2022. It gave me an opportunity to reflect on the thirty-plus years since creating the two paintings in INVOKING LIGHT and to discover the surprising recurrent themes in much of my work --- paintings, installations, small 3-d projects, etc. --- that, along with those of a formalist nature, are dominated by serious questions: political, environmental, image-related, that add up to PAY ATTENTION. Surprisingly, though, a significant number of works dealt with spiritual ideas about the word GOD, BELIEFS, and PRAYER.  Such a deep look in a rear-view mirror required me to reread decades-old journals and to examine earlier works pictured and discussed on web pages. I recommend this to  every creative person: you may be surprised to learn a whole lot about your art, your search(es), your questions, and yourself.