​It’s almost impossible for me to faithfully recollect the life-altering experiences I had in the summer of 1987. Every cell in my body has renewed itself ---what?, 5 times? --- so I am not at all the person I was then. I can sum it up, though: two things happened 31 years ago, close enough together that I don’t know which came first or if there is some causal relationship.  I DO recall the “overwhelmingness” of it, and I compare it to a profound religious experience  although, spiritual though it might’ve been, religion played no part in it.


It is hard for me to separate the two events. Sometimes I think that the paradigm shift made me open (and vulnerable) to a change in my immune system. It makes no difference; both happened, and my art changed.

During the summer of 1987 I was working on a multi-part installation titled “One World: A Series of Meditations.”  It was shown only once at the University of Texas at El Paso. Each aspect of it required me to be of two minds at once: I had to “know” on some fundamental level that this was Art, capital A, but also, while working on each individual aspect of the exhibition, forget totally about Art, art, Me, me, and let myself be consumed, absorbed into the content of the overall “piece”: that we were functioning --- just starting to --- as “one world,” and that there were universal connections.
​ 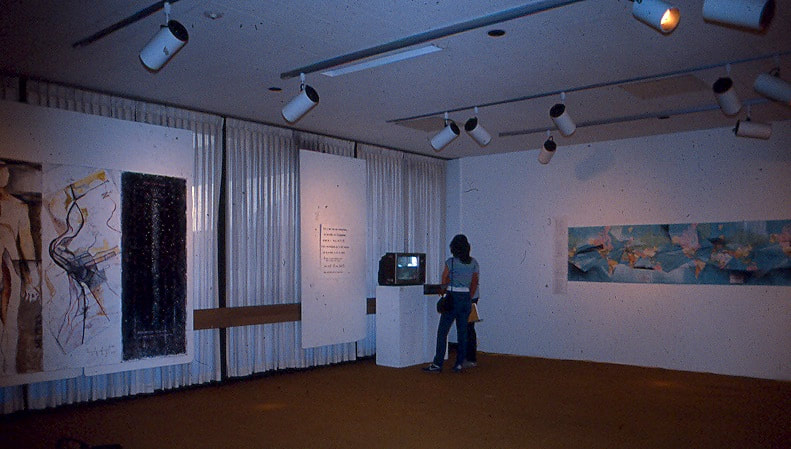 It was while I was absorbed in this multi-media project that my “event” occurred, and it shook me to my physical and psychological and spiritual core. For a period (of days? weeks? months?), I was a different person, a new person. I relaxed as a passenger in a car! (My husband can vouch for this change in attitude/personality.) I felt, I knew, that everything was “all right,” as it should be. I felt "as One" with everything. It was an extraordinary feeling.

Not too long after this, I recall being in a bookstore in a mall in Las Cruces. I had no agenda, nothing in particular to look at or for, but --- and I wish I could convey the “magical” part of this, and I wish you could know how unlike me this story is --- my hand was drawn to a book I’d never heard of, and I unquestioningly took it off the shelf.  It was “The Aquarian Conspiracy” by  Marilyn Ferguson. I bought it; don’t ask me how or why. It was one of those rare impulses or coincidences that some might call Fate. And that’s where I learned about “paradigm shifts” and much, much more. It was destined, even though I’m not “the type” that believes in such things.

One of the things that happened in reaction to my illness was that I had to change my art. I’d been serious about it for a dozen years or so, evolving from “pretty” pictures of things into more conceptual works, installations, and paintings chock-full of content, if one desired to engage with them enough. Art had become a filter through which I absorbed life, the world, in all its aspects: philosophy, politics, art-issues (the relevance of pictures in the post-Modern world). So while the work --- mostly large-scaled paintings --- took care of that, there were other ambitious projects that demanded energy I no longer had. What to do? I remember declaring to Ray that, even though I was almost bedridden during part of that summer, I would not give up teaching and I would not give up painting. So for at least one month, I required myself to make one 7” x 5” representational painting of a pear, one a day (during the month, my subject spoiled and required replacement) and that was the best, the “only-est” art I could do.

(A photograph of the pears, when located, will be inserted here.)
​
30+ years later, let me hasten to say that, while the pain and fatigue never abated, I learned to pace myself, to accept that I will pay for every expense of energy I use and, like a battery, sometimes I must quit to recharge. Folks who know me would, I think, describe me as having great energy. If they only knew… I should’ve been an actress.

In 1988 and ’89, I undertook a relatively serious study of CHANGE (that “paradigm shift): how it happens, the physics of it. And I did a whole series of works about it. Four of them were nonobjective but quite illustrative of how “change” occurs.

Another four or five paintings used figurative imagery to “act out” the same subject, but only one of them remains (Shift, shown below). ​ 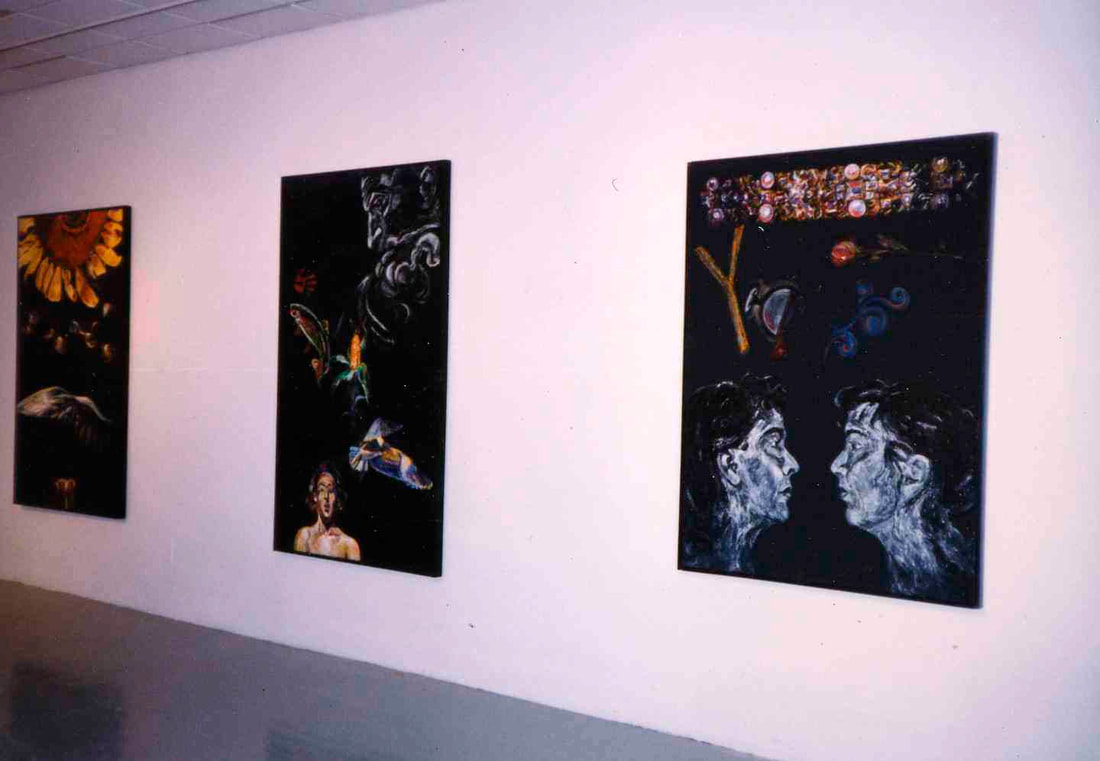 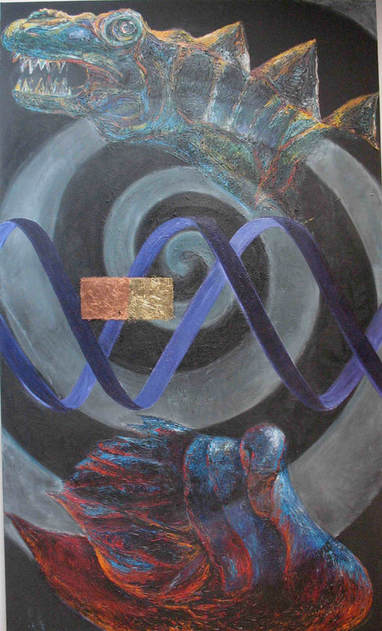 And then, in “Vision/Revision” at El Paso’s non-profit space, The Bridge Center for Contemporary Art, I was able to exhibit all these abstract and figurative investigations together and to create on a curved wall, using small painted plaster images and words, a summary of what I had learned and experienced. The change, the shift, was provoked by my art-making, and it was expressed by my art-making. How wonderful.
​ 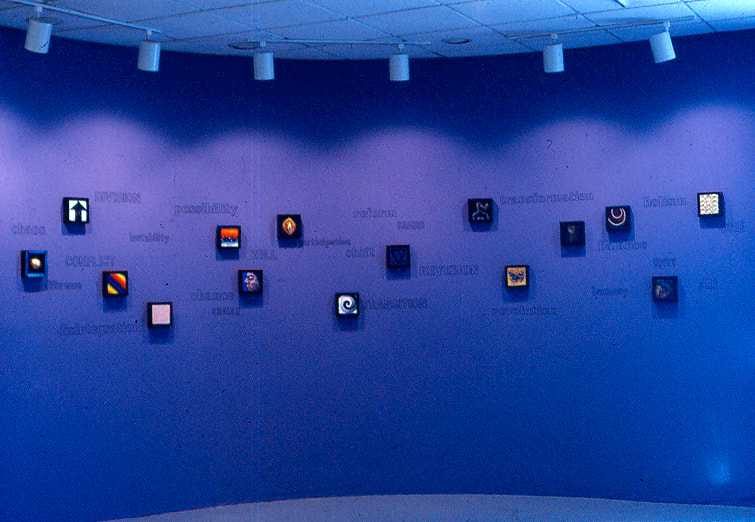 Briefly, let me describe the non-objective paintings, the “Change Series,”  that I think truly represent this exploration. The first of the series illustrates something I learned about, called punctuated equilibrium.” This is from the world of physics, alien to me but oh-so-relevant. Change occurs gradually, but it increasingly turns into an unpredictable period of chaos. So I made the vertical white are gradually disintegrate into a band of unrelated colors. Eventually, out of this chaos and instability, comes --- and quickly; dramatically  --- a “punctuated equilibrium” after which everything is anew, different. What I learned was this: that change happens gradually, and then the changes become so over-whelming and destabilizing that a sudden and major shift can occur, and it cannot be predicted. 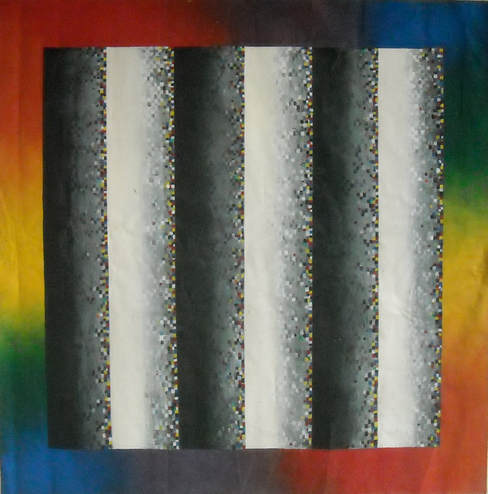 Punctuated Equilibrium, oil and acrylic, 60" x 60"
​Permanent Collection of the Meridian Museum of Art
This requires me to interrupt myself to say we artists take privileges and that my “changes” from white through the instability of all colors to black is a complete contradiction of the science of change. Reality would NOT change from white to black to white, etc. as I have illustrated it here. I wanted to make a good painting, so shifting into blue-violet, then into multi-colored instability and into, say, orange, etc., etc.: aesthetically: no thanks. I decided, for design reasons, to stick with a very incorrect and oversimplified description of the true physics-based understand of profound, and unanticipated change because it made a better composition. Science: forgive me.

The following photographs, along with the one shown above, illustrate what I learned.
​ 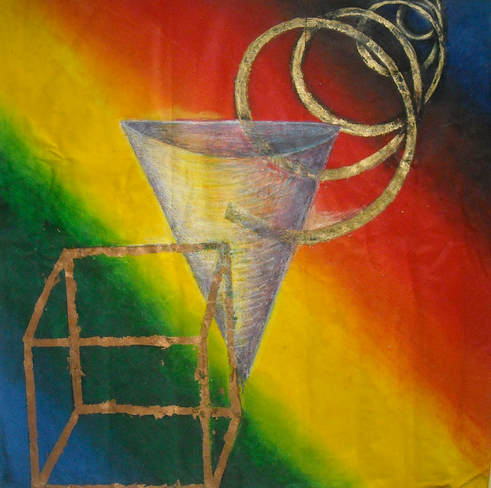 Through the Fire, acrylic, oil, brass and gold leaf, 60? X 60?
Permanent Collection of the Meridian Museum of Art, Meridian, Mississippi
(Note the purple crucible. The color purple would become my symbol for change because that was  Alice Walker’s in concept her iconic novel of that name. ) 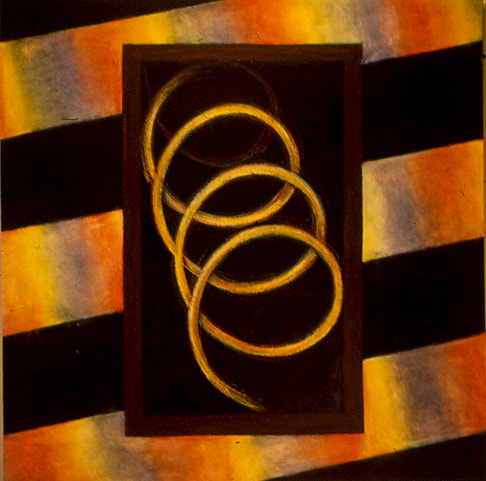 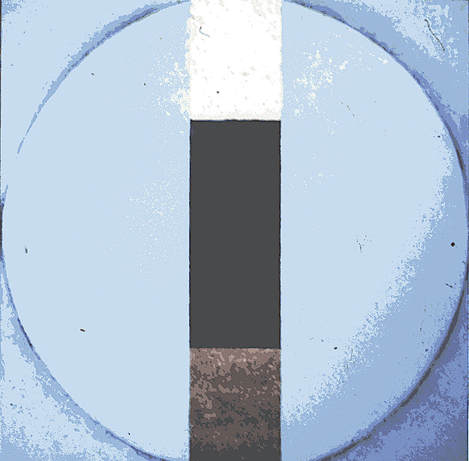 Alchemy, oil, acrylic, bronze and gold leaf, 60"” x 60”
Private Collection, Portland, Oregon
And so, with the exhibition "Vision/Revision," the series ended, and I forged ahead with other works: paintings, performances, installations, and other works that brought about other topics and responses to the world, and rarely but occasionally, to my personal world. These four paintings document the latter, even though they might appear to be impersonal. Art "acts" that way, and so, for the Meridian Museum of Art, I share this long and complicated story of three simple-appearing paintings. ​​