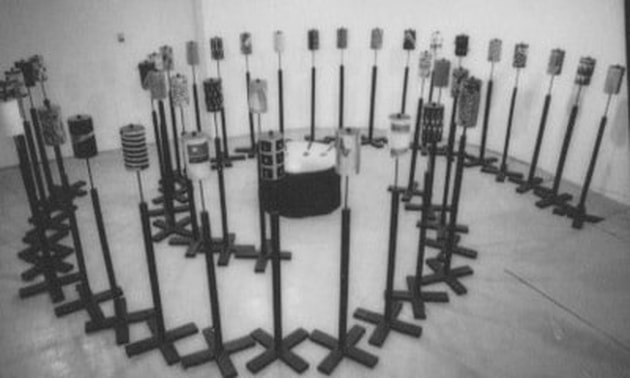 For a wonderful while in El Paso, there was a widely-recognized non-profit gallery named the Bridge Center for Contemporary Arts. In its successful run, it occupied several locations in downtown El Paso, hosted terrific shows by local artists but also by serious artists from all over the country; it was that "popular," successful, and renowned. It even published a monthly newsletter, edited by photographer and once-Director Richard Barron. (Directors came and went, and the final one was imported from outside the local "scene"; I think that predicted "The Bridge"'s end.)

Its focus was contemporary art, and back then --- it was the 1990s, mostly --- folks were pushing boundaries, experimenting with new media, making installations and participatory environments; basically, they were redefining Art, and --- in El Paso, of all remote place --- it was an exciting time.

I was lucky to have more than one exhibition there ("Vision/Revision" is featured on another page in this section, and to participate in group shows and the endless fundraisers, auctions (give-aways), and other requisite chores of the not-for-profit world. One of my favorites was a 4 or 5-person show whose name has long ago escaped me. But the idea sticks: The Bridge invited us to make something, anything, within a budget of $200, an honorarium handed to each of us.

My creation was great fun and extremely casual in its media: simple, painted, wooden bases holding 42 cylindrical cardboard tubes arranged around a borrowed grocery security mirror. But the theme was most serious: it was a "boon" circuit, a spiraling walkway of prayer-wheels, each dedicated to something or someone, in general or particular, obvious or vague, by me or by another person. The honorarium went mostly to the purchase of 42 pounds of oatmeal whose packages became the basis of "the piece." I remember pouring the oats into black garbage bags and taking them, 10-or-so pounds at a time, to the downtown homeless shelter/Mission. Oh, goodie, I could see their eyes shining with anticipation of heavy winter coats, sweaters, etc. and then: ohhhhh, oatmeal. More than once this little drama occurred, until I had my basic shapes. 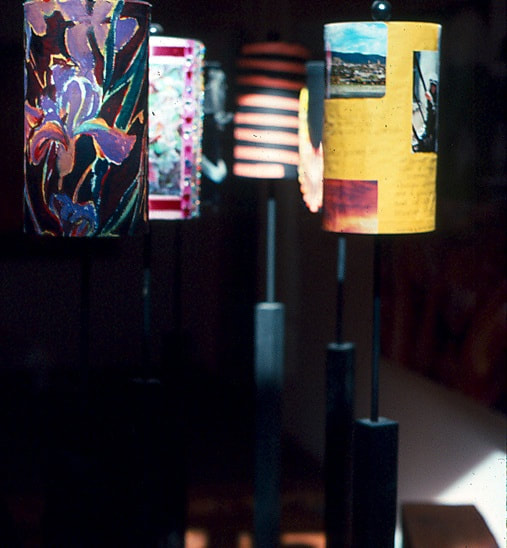 (More photos of the  wheels' details will be inserted, if/when found.)

The prayer wheels were arranged in a yin/yang spiral, if viewed from above, and when one gets to the center, the "viewer" as well as all the surrounding wheels were reflected from the central convex mirror, on loan from a neighbor's grocery store. It was a sweet experience, walking slowly, reading and looking at the individual wheels and turning them slowly: some had photographs, a few had poems winding around them, some were collages of fabric to which one might attach one's own significance. And the oddest thing happened, evident, I think, from this page: "Boon Circuit" refused to be photographed. This was back in the day of film, and no one's photographs, save the few shown here, "turned out." None of mine, none of The Bridge's, none of the newspaper art editor's; it rejected being documented. We all scratched our heads.
​