Pictures and Their Stories, #1

Scene of the Crime

Back in the 1980s, we’d go to Hermosa Beach in Southern California every year. We always stayed at the Sea Sprite, a 1950s-style motel on the Strand, and #14 was our favorite room, overlooking the swimming pool and the Pacific Ocean beyond. Nearly every day we’d walk north to Manhattan Beach and sometimes beyond. We might eat at an ocean-side cafe or go inland a block or two to window shop, and of course I was never without my camera.

It was on a Sunday walk that I saw a house that quietly announced itself: I am perfect, it said, just look. The house was a simple white-stuccoed box and less grand than many of its neighbors. The brick patio was surrounded by a short brick wall that I dared to step over to compose a picture worthy of the house. For some reason, I had to have this certain view, this ideal site. Roses as big as Big Macs bloomed around the patio, and a shaggy black dog slept on the steps. I took my picture, and away we went and I didn’t think about it again. 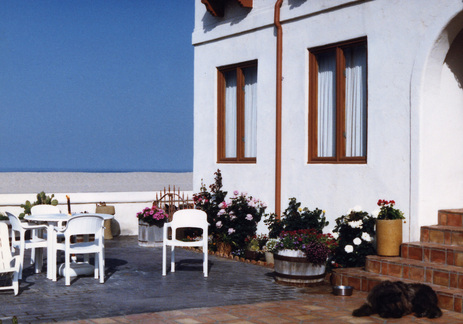 That Thursday I picked up a local beach newspaper, a weekly that I’d never looked at before (or since). The headline was shocking: a murder had taken place the Monday before, on the corner of a numbered street and the Strand. The story was full of lurid details and read like the script of a recent popular movie, Fatal Attraction.

The house was owned by a doctor and his wife Jane (an invented name), a retired nurse. Jane’s mother was visiting from out of town, and she had stepped outside carrying a tray with lunch for the two of them. Passersby on the Strand, which is always busy and close enough to houses for easy eavesdropping, witnessed a young blond woman step over the patio wall and confront the older woman. She was later identified as Barbara Hendricks, quite a coincidence - I am a Hendrick - but just an odd one, I didn’t linger on it. Back on the beach people overheard a heated conversation: This is private property, Jane said, you need to leave. And the younger woman responded, I’m six months pregnant and there’s nothing you can do.

Jane was still holding the luncheon tray when witnesses saw Hendricks push her on her chest. Then, according to the report, she casually picked up her red leather bag, stepped over the low wall, and calmly headed toward town where she was later arrested. Jane, it became clear, hadn’t been pushed, she’d been stabbed, and in a few minutes she bled to death on her patio.

I knew this was “my house,” don’t ask me why, but I knew it, and it was. That Saturday Ray and I assumed a nonchalant position on the Strand and watched as stylish couples, all in black, went solemnly into the house.

Cue the creepy music and let me share my questions and thoughts. What made me take that particular picture on that particular day? The house wasn’t that special, and I didn’t normally take photos of houses. Did the site give off some signal (like milk announcing that it’s about to “go bad” in the fridge)? Did I unconsciously sense that the view’s perfection was about to flip into horror?

This was in the days of film cameras, and I’d have to wait until after our vacation to see the image. It was easy, though, to imagine it, inside my camera, in negative form. Everything was reversed:  with its black roses and orange sky, the image that had attracted me flipped, in a moment, from simple, perfect beauty to its opposite, hideous and tragic. 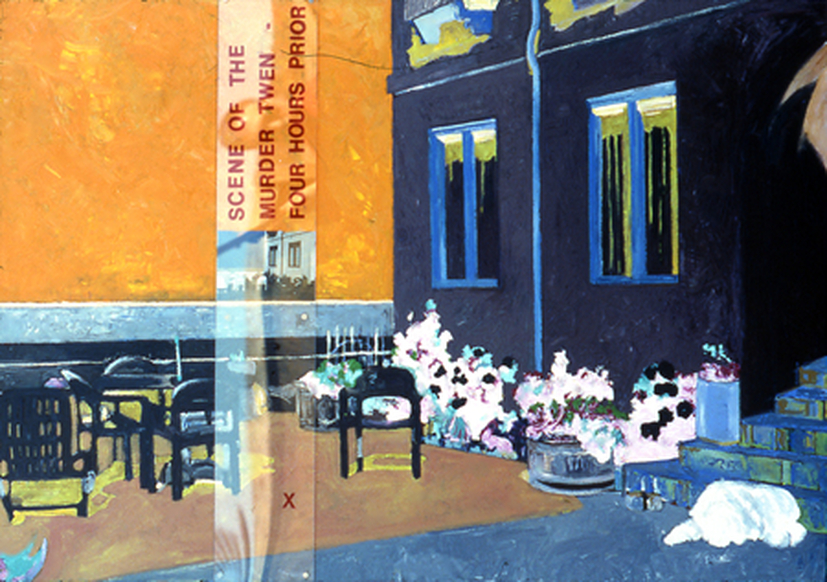 ﻿I didn’t have a choice; I had to make a painting. The printed photograph was 3 1/2” by 5” and I stretched the canvas to be 3 1/2 feet by 5 feet, an easy decision. I painted from my pretty photograph, translating colors into their opposites, as though I were copying a negative. I hated the process of painting it and could hardly look at the colors as I worked on them. the finished painting, exhibited only once, disgusted me as much as the original view had seduced me.

Whenever we visited Hermosa Beach after that we’d pay special attention to this house. The patio wouldn’t be swept, and the surrounding plants were neglected and dying. Once the big sliding glass doors that faced the beach were open. Inside the room, near the glass, sat a man, middle aged, the doctor, we presumed. He was watching television, so he had a vacant and fixed look on his face. We couldn’t see the tv, hidden as it was in the far right corner of the house. What we could see from our position on the Strand was a lonely soul staring staring staring into a dark corner and never looking out toward the beautiful Pacific view.