9/11 almost did me in. As an artist, it forced me to change everything about my work. Its subject matter could no longer be so tough and confrontational. (Below: Redemption, acrylic and enamel on canvas and aluminum, 36" x 60", collection of the El Paso Holocaust Museum.) 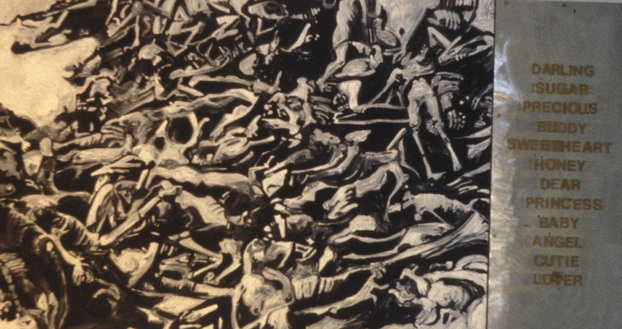 For six months I lay on the couch with my back turned away from the constant television news. I taught, but otherwise did little creative work, and I almost never smiled. A small portrait of my first grandchild gave me a reason to spend time in the studio and engage in a close-up visual meditation with something precious, life-enhancing and positive. 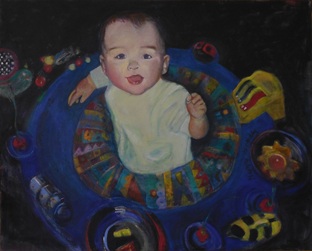 From May 1, 2002, until April 31, 2003, just to have a reason to be in the studio, I worked on five large canvases that I called my “Post-Traumatic Stress Series.” I painted in an entirely new way for me, using only objects that were already on hand, having no preconceived theme or content, just gluing and applying metal leaf, arranging and rearranging and editing. These were eventually shown in galleries and museums and eventually all sold.

Along the way, I came across a small color slide that I’d never looked at or shown before, a reproduction of an 11th c. manuscript page. It featured images of six humanoid beasts, a satanic figure, and medieval figures tumbling down the page. From the beginning I only wanted to  enlarge the page into a monumental canvas, but I couldn't find a reason to do such a major painting, being in a paralyzed mind-set. Then I was offered a show in a Santa Fe gallery and started to work on a 7' canvas. I think it is the only time in my life I’ve projected an image, and the initial composition was more of a true reflection of the original manuscript page. 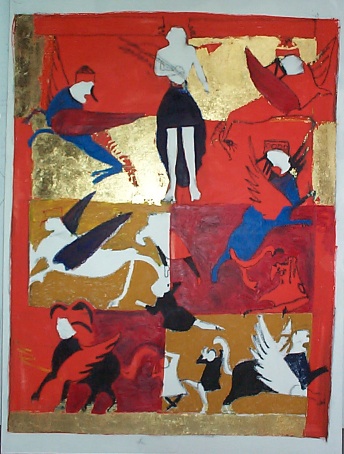 First I included the figure of the devil --- How do I know who he is/was? He was wearing a beauty-pageant banner across his chest that said SATAN ---, then I painted him out; then I painted him in; then I painted over him. I did the same with the little men tumbling down the picture plane.; in, out, in, finally out. Ultimately I realized that, instead of a menacing warning, I wanted my painting to serve as a prayer or plea, so I made the lead panel read in Latin: Our Lord God, Have Mercy on Us. Ever since returning to the studio after 9/11, I had listened over and over to Messian’s “Miserere,” and the first 30 minute “song” had those five words sung, a capella, again and again: Domine Deus Nostre, Miserer Nobis. Miserere Nobis. God have mercy on us. 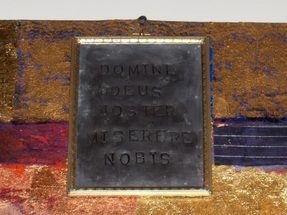 I had intended to call the painting “Miserere,” but before deciding on its name I happened to study the original slide (which I can no longer find) and read the title written on it: Apocalypse. So that became the painting's name, along with two dates hammered into lead: 1050, the approximate date of the original manuscript page, and 2004, the current date. But it wasn't quite finished. Before I showed the work, I came across “Six Reasons for Evil” in a novel by Philip Roth: hysteria, hate, ignorance, malice, anger, stupidity. In another piece of fiction I was reading at the time, Salman Rushdie's character lists “6 instincts to control”: passion, anger, intoxicant, attachment, greed, jealousy. Both lists seemed relevant to the painting, and I tried (and decided against) writing them into the figures, in paint and on lead. In the end I merely wrote Roth’s list  on the back of the canvas. 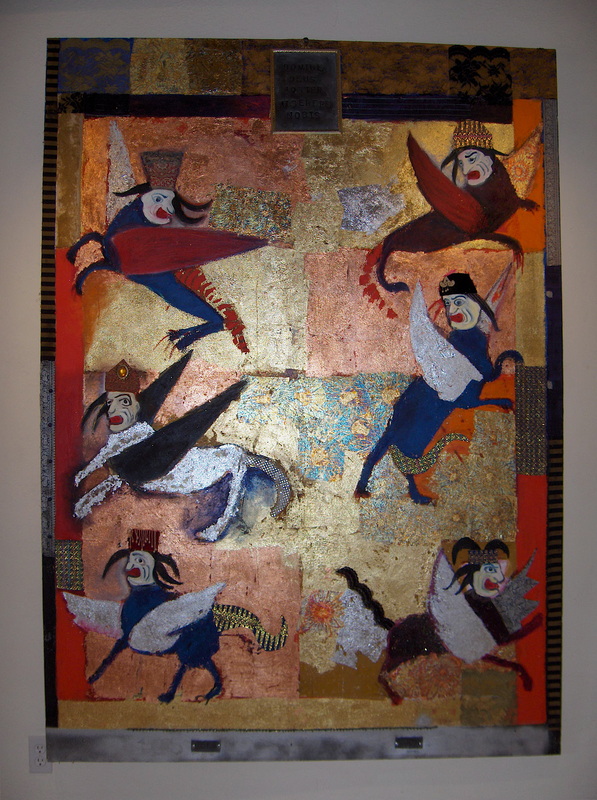 Apocalypse 1050-2004
mixed media on canvas with lead plate
84" x 60"
private collection
Except for small and private portraits of people who make me smile, "Apocalypse" would be the last ambitious painting I would do. God have mercy on us. Amen.