As Yugoslavia disintegrated into warring ethnic factions in the early 1990s,
I made a small painting as a tribute to Mondrian, sadly titled Nice Try, Piet.


In the Service of Wholeness

(Author’s note: In the small art appreciation text I wrote in 1999, this essay appears under the title Mondrian and I. Although it appears as Chapter 13, it was the first and easiest chapter I wrote, and it inspired the book’s title, Getting It. On September 12, 2001, having cancelled classes the previous day, I read this aloud to all my classes rather than present the scheduled lecture. Even now, when the world seems to be falling apart, this lesson seems to help.)

Every time I visit New York City I try to set aside one day for a pilgrimage to the Museum of Modern Art. Early in the morning I start a long slow walk up Fifth Avenue from the southern tip of the island. I go alone so I can stop anywhere along the way to browse through shops, get coffee, or people-watch at Rockefeller Center. I almost always see Someone Famous; once a network news anchor careered around the corner across from her office --- I was window-shopping at Tiffany’s --- and crashed into me with her dry cleaning. I almost always witness some sort of urban crisis: fire engines or squad cars, parades or protests. It is most often Spring, always noisy, lively, energetic, and I love New York City that day. Life, as I make my ritual stroll, is good. 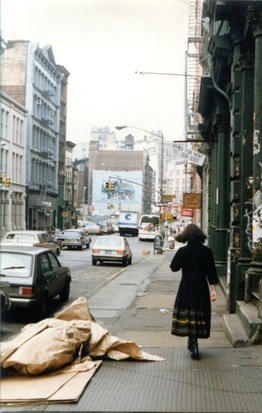 At the museum I see whatever special shows interest me, and then I escalate up to the permanent collection. 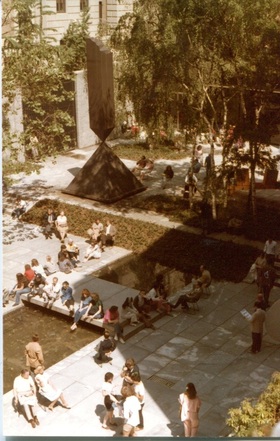 I suppose there was a time years ago that I went from painting to painting in a methodical way, but now my habit is different. I stand in the center of each room and make a slow turn, letting paintings invite me to them for a closer look. I seriously study whatever artwork lures my attention, and at the same time I make a mental note of what appeals to me in a new and different way. One day I was attracted to a painting by Matisse, a gem-like abstraction that I had never noticed before, one that I wasn’t familiar with from reproductions. (Looking at a souvenir postcard of the View of Notre Dame, I have to admit that this subtle painting isn’t well-served by reproduction; see Chapter 5 in Getting It.) 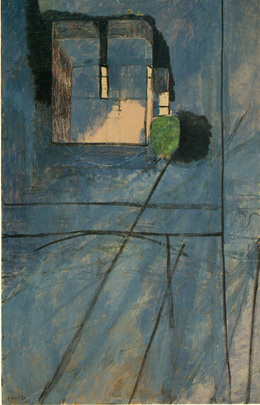 Another time I spent several minutes exploring in close-up detail a series of large vertical paintings by Kandinsky, falling in love with passages of line and color. Every visit to the museum becomes a wonderful exercise in discovery --- about art, of course, but also about whatever it is that draws me to a certain work of art at a certain point in time.

In early 1991 I was at MOMA, doing ‘my thing,’ and I entered the small room hung with compositions by Piet Mondrian. A dozen or so paintings of varying sizes, squares and rectangles, verticals and diagonals, bore evidence to Mondrian’s commitment to the integration of black, white, red, yellow and blue. These works weren’t new to me; I had long admired Mondrian and used him as an example to students in design classes. But on this particular day, in a room I had passed through many times, I Got It. Here I was, a serious artist and teacher for over twenty years, and Mondrian’s art was speaking to me for the first time in a truly profound way. I was so shaken, so moved, that I had to sit down. There is a bench in the room, and I was not alone as I sat and rather breathlessly looked at the paintings around the walls. Every now and then my eyes intersected those of people sitting nearby, people who looked as stunned as I felt. Our gazes momentarily met, and we nodded to each other ever so slightly. Yes, we were saying, yes, to each other and to Mondrian.

Later I met a friend, an artist who asked about my day at the museum. I reviewed for him: so-and-so’s work was terrific and someone-or-the-other had a great installation. Then I cautiously began, “But you know, I had a really significant experience there…” and before I could go on, he interrupted excitedly. “Mondrian, right?” What was going on, we wondered. Why were we being so affected by work that hadn’t stirred us this powerfully before? For months afterward, back at home in the provinces, I thought more and more about this episode. I investigated Mondrian with a good bit of seriousness, examining books of his paintings and reading his statements. I discovered that he had been a Theosophist and made a mental note to look into what that might mean to his work; someday I will. It isn’t hard to see what the artist was doing in a formal sense as he brought equivalent and exclusive elements together into balanced order. This is the stuff of any basic design class, and Mondrian’s grids exemplify the goals of composition in an elementary way.

But Mondrian’s achievement as an artist goes much deeper than simple two-dimensional design. In the 1930s and 40s, Mondrian was developing his aesthetic language of line, shape and color along with other Modernists who were breaking with the pictorial tradition that had defined art since the Renaissance. Gone were illusionistic space, imitative form, and ultimately all reference to pictorial reality. Instead, artists used a universal language of pure form, freed from the constraints of subject matter and symbol.

This was profoundly heady stuff, philosophical, spiritual and, yes, political. Representational art of the time was being used by the extremes of the political right and left: the Mexican muralists, the American Social Realists, regionalists and nationalists pictured and proselytized from both sides of the political spectrum. Modernists like Mondrian were idealistic and anti-nationalistic; their pure visual language appealed to the universal and utopian. Modernist abstraction, said critic Arthur Danto, “set out to change the world and redeem the human spirit.”

Over the years, working first from closely observed nature, Piet Mondrian discovered that he was interested solely in relationships. In his words, his goal was to achieve “pure reality” which he defined as “equilibrium through the balance of unequal but equivalent opposites.” He pared his formal vocabulary down to painting’s purest elements: red, yellow, blue, black and white are color. Each is completely independent of the other and yet each is necessary for color’s completeness. To unify these oppositional elements, Mondrian limited his shapes to the single yet infinitely varied rectangle and introduced a structure of black lines to hold these forces in a state of tension and coherence.

Imagine doing what Mondrian did, time after time in painting after painting. Confronting the empty canvas, he set out to bring disparate elements into completeness, wholeness and balance. If it can be done on the picture plane, the art implies, so can it be done in the world. Over and over Mondrian faced the blank canvas. What daring, what courage, what an act of faith! His painting process became a devotional act, a “bringing into being” of unity, relationship and meaning.

Art isn’t made in a vacuum… What we feel compelled to do, whether it’s making art or
giving your life to God --- I personally don’t think there’s any difference between the two
--- evolves out of the inner fabric of our lives… The work, the vocation is an attempt… to
fulfill in an inner way, in a symbolic way, what the outer world is failing to provide… in
the service of wholeness.                                    (Gail Godwin, The Good Husband)

I remember a day in late 1990, listening to the radio in the kitchen as the Berlin Wall came down. I stopped mid-chore and paid attention with great emotion and prayer-like intensity. There followed a period of weeks, perhaps months when people like I who yearned for, spoke out for and worked for the resolution of differences and the breaking down of barriers felt a surge of hope. In retrospect it seems incredibly naïve and simplistic, but as I visited New York City I was still experiencing that sense of hopeful idealism. And when I walked into Mondrian’s room at the Museum of Modern Art, the intention of his work connected with whatever was going on in my psyche. At that moment, through his art, the artist’s intention and mine were aligned. We were on the same wavelength. I Got It.

Many times art is hard to Get. It may take, as it did with Mondrian and me, many years. Sometimes we never Get It. But, oh, when it happens… Art has the power to connect us to some fundamental truth, to bring us to a place where idea and intention and form coincide. It is a revelation and an affirmation of something most profoundly divine and most essential human.

The beauty of art and nature is a manifestation of the unity of being…
It is to this wholeness that all orders of creation aspire, and from it that all have been created.
(Plotinus) 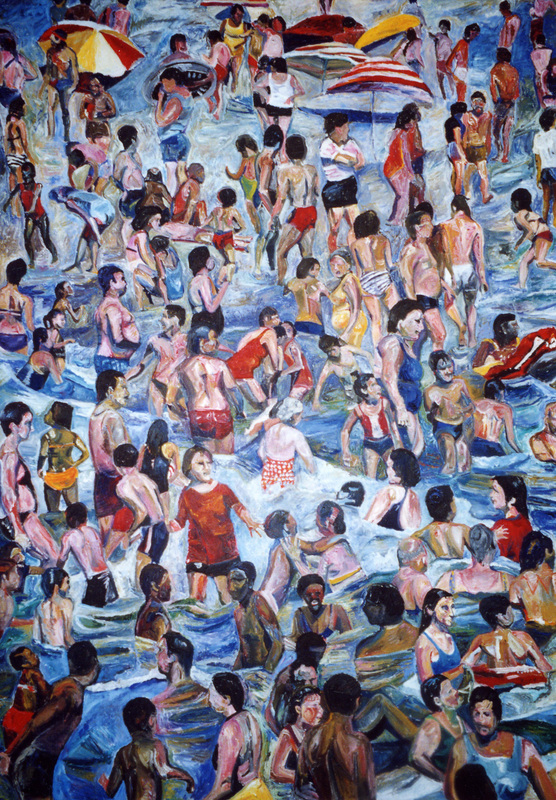 Composition with Red, Yellow, and Blue (Soup), 1990
acrylic on canvas, 84" x 60"
This painting's title references the titles of many of Mondrian's paintings. While Mondrian used the formal language of pure geometry and pure color,
I filled the canvas with the maximum number of figurative elements. But my goal was the same. Within the picture plane, the variety of figures --- age,
size, skin color, etc. --- comes into balance and unity. And, harmoniously playing in the human "soup," they are having a fine time.
How do I know, people ask? Because, I say, they were smiling when I painted them. 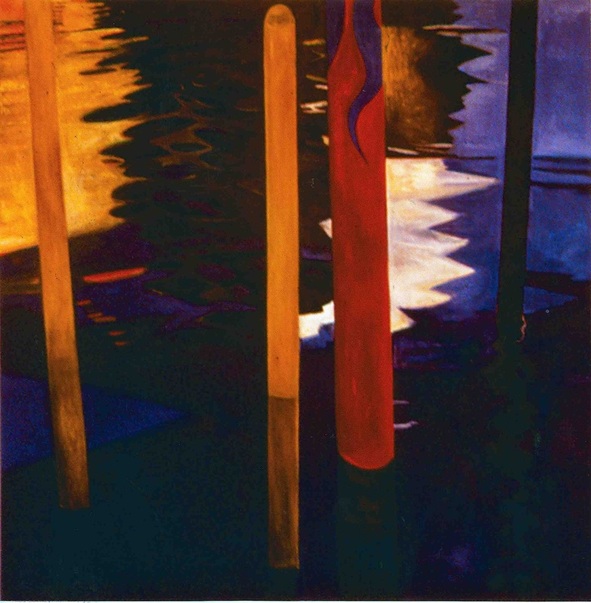 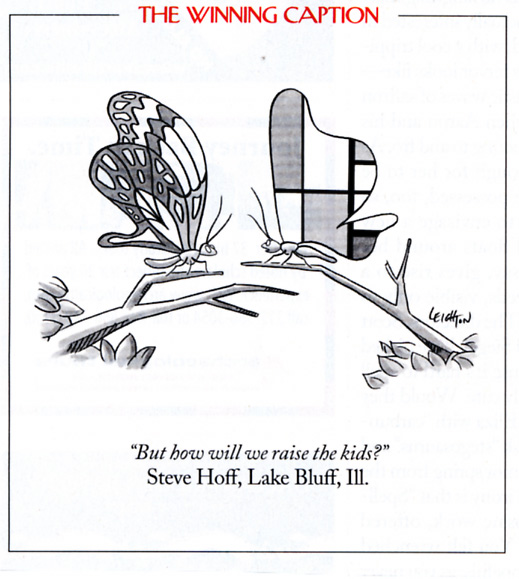