Moving from the midwest to the southwest in 1985 was a wonderful shock. To get used to the new environment, I walked and looked (I still do), always with a camera. My walks and sights inspired quite a few paintings on paper, each 22" x 30". They are all gone, to private collections, and I'm glad I have photographic evidence of some of them. They were never publicly exhibited and I didn't take them very seriously. Painting them merely gave me a reason to be outside, to examine the long views, to study the mesas and the mountains, to meditate on scale and relative insignificance, and to learn my new, true home. 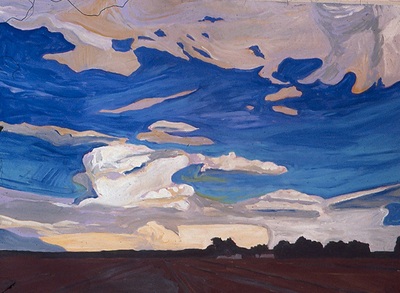 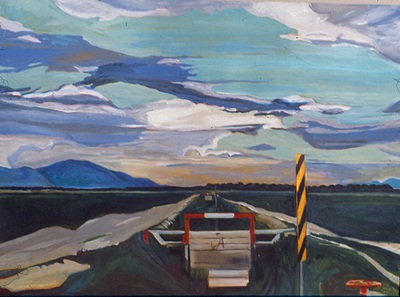 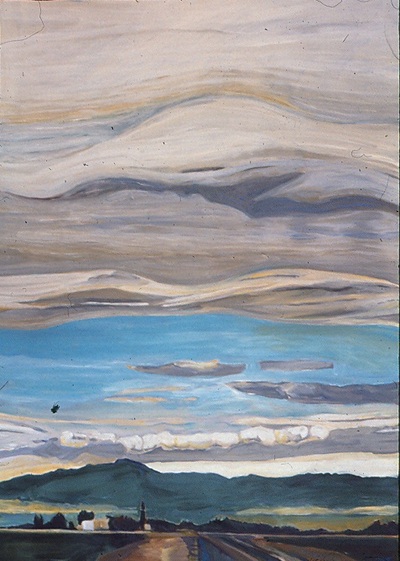 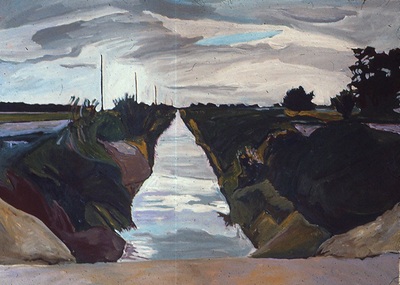 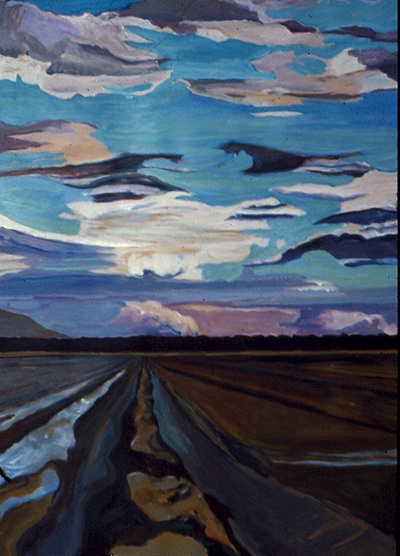 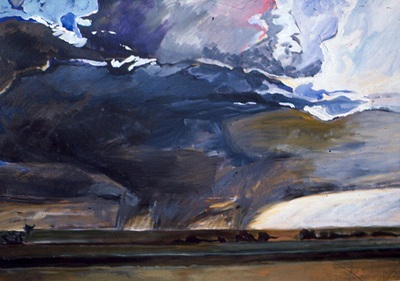 These were odd paintings for me to do, out of character. In Indiana my work had evolved into multi-media constructions and participatory environments, with occasional paintings around the edges, and there was a lot of social and political comment. In my new New Mexican landscape, these representational paintings were nothing more (or less!) than looking-and-seeing exercises.

From our house there was an unbroken view of the Franklin Mountains, where the Rockies end in downtown El Paso. Separate from the works on paper, I did two small paintings on masonite, and each was “life size”, measuring 11 ½ ” x 19 ½”. One of them survives. 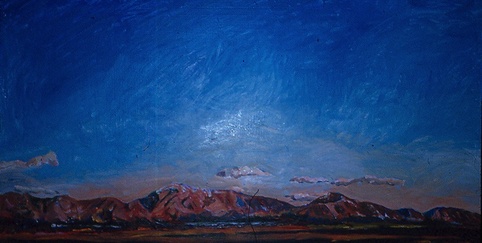 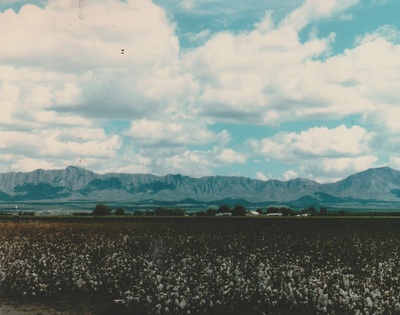 The painting shown above has had an interesting life. It has hung in galleries and museums in four very different ways, for four very different reasons. It has been seen as 1) itself, by itself,  2) part of a participatory installation,  3) one of two works dealing with environmental issues, and finally, it exists as 4) a component of a painted assemblage, one of five works done in response to 9/11. 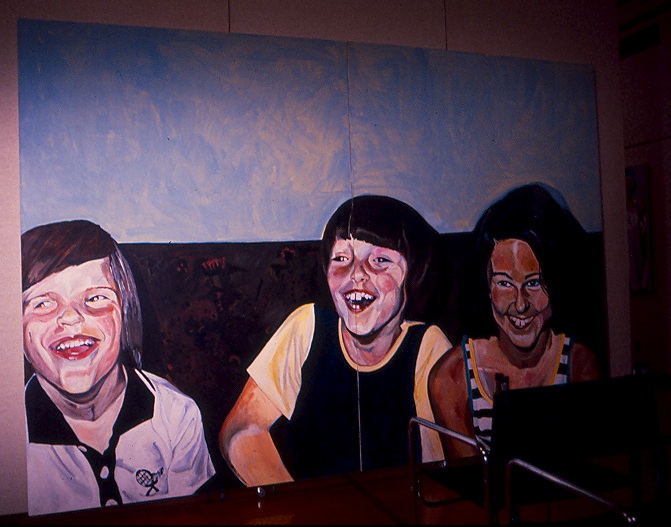 2)
At a show at UTEP, I installed this 10' wide painting across from the small landscape with two chairs centered between them, one facing each piece. The title was special, related to meditating on things permanent (the mountains) and transitory (a nano-second of true joy) and to a consideration of scale. I can not find the title for either the large painting or the installation that is shown below.
​

3)
In 1990, when I worked on a series of environmentally-charged paintings and constructions, the small landscape found a new role as the centerpiece of a 4’ square of charred twigs.  I put this piece and a companion to it in storage for many years --- they didn't "work" for me --- but I eventually salvaged the original 1985 panel, saving it for who-knows-what. 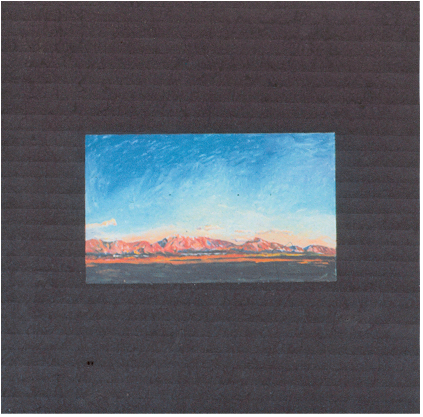 
During the 1990s a lot of my most serious work --- paintings, multi-media constructions, installations, performances --- had obvious social/political content. And I also did a significant series of large “beach paintings” that were only about formal issues: picture, pattern, and paint. But the events of 9/11 stopped me cold. For six months after the terrorist attacks, I could only work on a small portrait of my first grandchild, and the “deep looking” that painting required saved me; I got out of my fetal position on the sofa and went back into the studio. 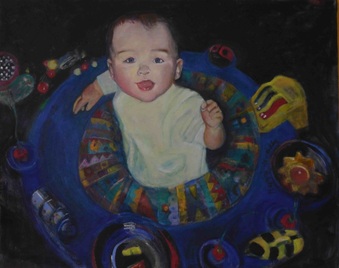 4)
After a while I knew I had to get back to Real Art, but I didn't have the heart for the kind of things I'd been doing "before." I decided to work in a totally different way, just fooling around with five canvases and no targeted goal, no set expectations. I used whatever was in the studio. I cut apart old works. I glued found objects and materials into the compositions. I added and rearranged and edited and deleted. I decided to work on these five pieces, my “Post-Traumatic Stress Series,” for exactly one year, beginning on May 1, 2002. Unlike my earlier works, whose intention was to encourage attention (and perhaps action), these five assemblages served me as the artist, and perhaps those who viewed them, as prayers, appeals, and blessings. 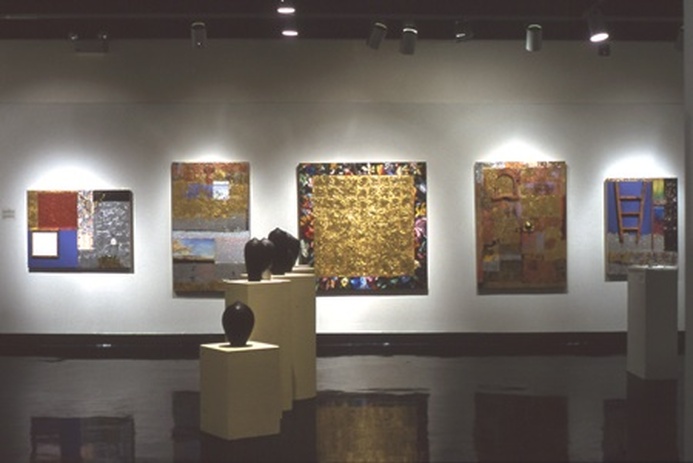 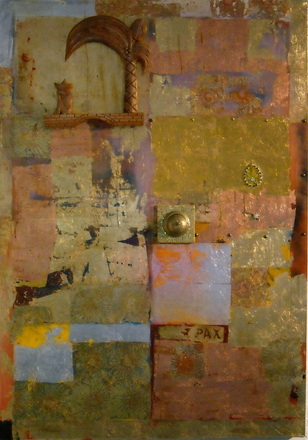 (When this painting was shown at the New Mexico Museum of Art in Santa Fe, curators roped off the area in front of the painting to keep people from touching it, even though the bell was/is intended to be rung. During the opening of the exhibition, I boldly and repeatedly crossed the barrier and rang a prayer.)

While I worked during that tough year, I listened to music, particularly two cd’s that I would play and replay. Gorecki’s Miserere became my studio theme music; it would eventually be the inspiration for a large painting (shown elsewhere on this site, titled Apocalypse 1050-2004) that brought my painting career to an intentional and appropriate close in 2005. Jane Siberry's lyrics in k.d. lang’s rendition of Calling All Angels  gave me great comfort in those post 9/11 months and generated the title for one of the assemblages, shown below the lovely words:

Oh, a man is placed upon the steps, a baby cries,
High above, you can hear the church bells start to ring,
And as the heaviness, oh the heaviness, the body settles in,
Somewhere you could hear a mother sing.

Oh, but if you could, do you think you would
Trade it all, all the pain and suffering?
Oh, but then you would’ve missed the beauty of
The light upon this earth and the sweetness of the leaving. 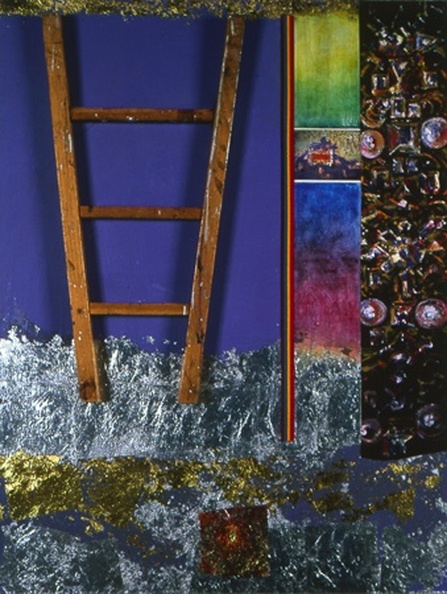 Sweet Leaving
private collection
Back in 1988 I had made a 5’ square painting to “illustrate” how depression works. 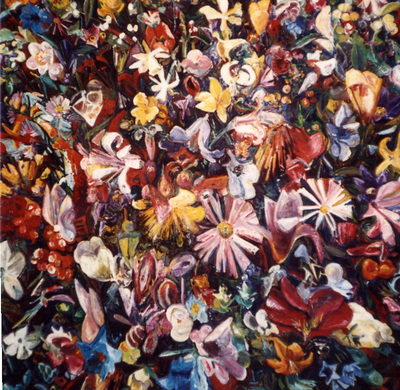 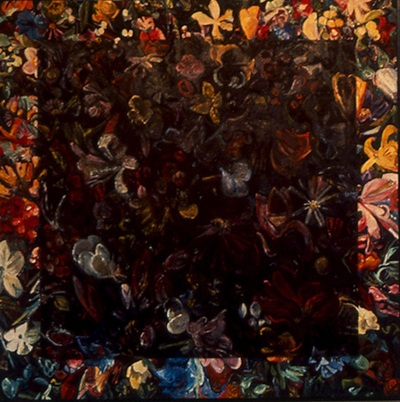 I recorded the process in a sad little video that you can watch online: Youtube: https://www.youtube.com/watch?v=JMTnZ7jsGnc

My final words in the video --- I don’t know if it’s finished --- would be prophetic; it wasn’t.
Working post-9/11, I used gold leaf I had stored in the studio, reverently applying it square by square, inviting in a “blessing,” and becoming engulfed by the large area of pure gold. Done! 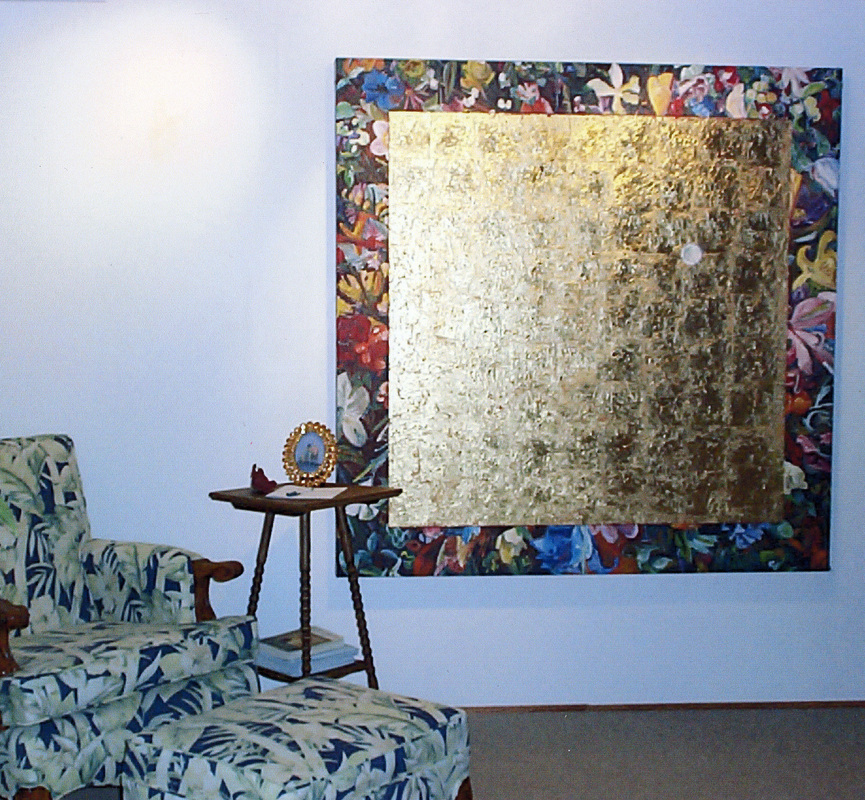 
Listening to music, I worked in the studio for at least four hours each day, with no agenda. I cut apart old paintings and reassembled their pieces. I found antique doo-dads and glued them into the compositions. I went from canvas to canvas each day, adding and deleting. When would I know the piece would be finished? I decided to work every day for exactly one year (May 1, 2002 - April 31, 2003) and to then just stop.
​ 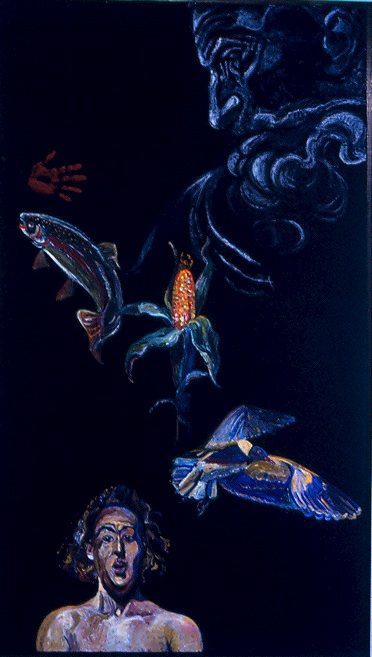 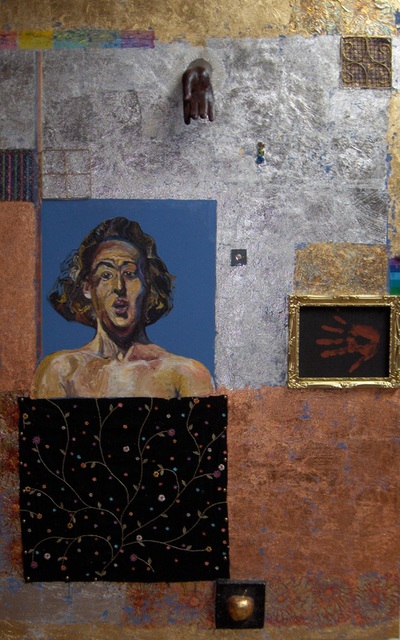 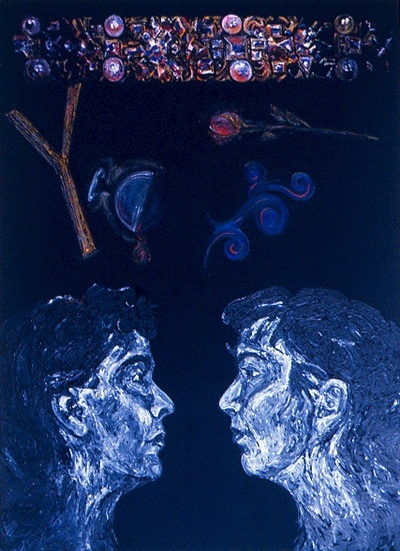 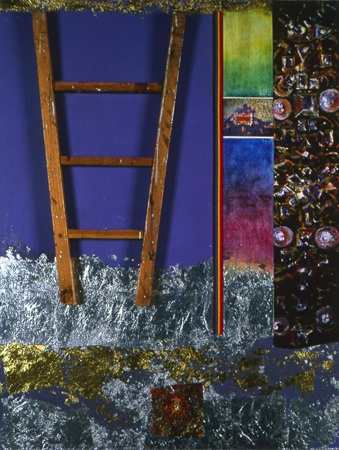 4)
And, coming full circle, my precious little landscape was reborn for a fourth time, finding its permanent place in a work I call The Edge of the Known: a simple meditation on horizon lines and dividing lines, between heaven and earth, life and death. 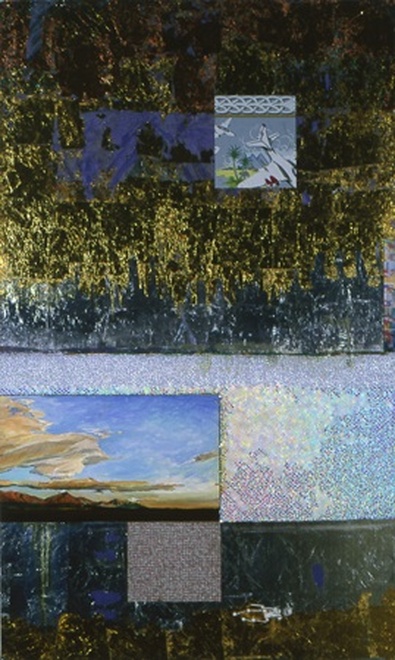